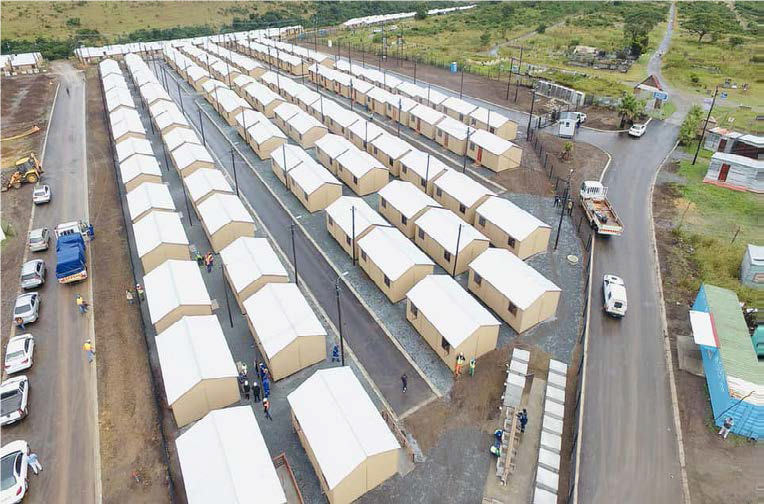 BUILDING HOUSES IS A PRIORITY IN SERVICE DELIVERY
Buffalo City Metro (BCM) has delivered a number of housing projects despite informal dwellers migrating to the City for greener pastures.

The Executive Mayor Cllr. Xola Pakati, during his address at the virtual State of the City Address (SOCA), spoke about new housing developments in the City from the start of the current term.

“Township establishments that will automatically activate development in many of our informal settlements have been undertaken and since 2016, we have established 19 new townships.

Human Settlements, Water and Sanitation Minister Mmamoloko Kubayi visited the City recently to assess progress on the project with the aim of establishing permanent housing in the densely populated Duncan Village.

Pakati unpacked the progress of the project: “Together with the National Human Settlements Department, we are now busy implementing the massive Duncan Village Project which will see 20 000 households moved into habitable houses and it will also lead to the de-densification of Duncan Village. We are happy to report that already 931 housing units have been built in Reeston and handed over to beneficiaries from Duncan Village,” said Pakati.

Mdantsane is also part of the upgrading of informal settlements along the buffer strip.

The buffer strip consists of five areas which are: Masibambane, Masibulele, Ilinge, Velwano and Dacawa with 1459 units with 1297 units completed.BCM is steadfast in ensuring that residents in rural areas also receive decent houses of brick and mortar. Peelton, just outside Qonce was earmarked for housing development as from 2013 with a funding agreement that was allocated for a total of 2174 housing units to be scattered in the entire area.Pakati also shared about the good working relations between the City and the Department of Human Settlements.

“Since the start of our term in 2016, working with the Provincial Department of Human Settlements, we have built and handed over 8 930 houses and 11 367 serviced sites to the people of Buffalo City. In the next financial year, we will be handing over around 1600 houses and 800 serviced sites.”