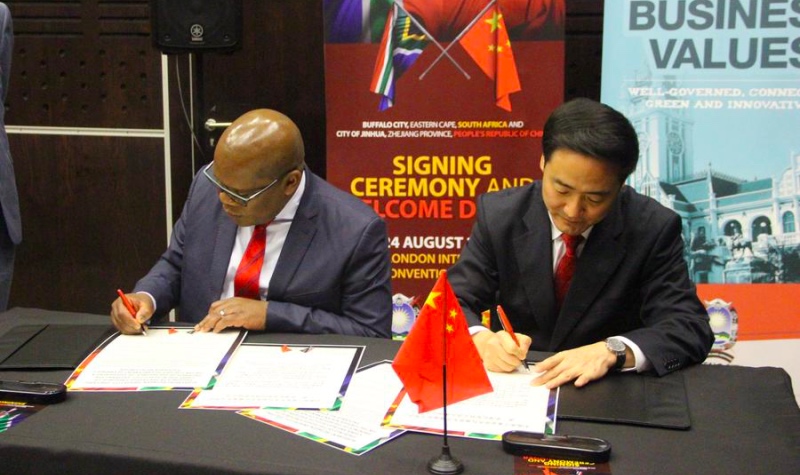 
Hundreds of jobs are set to be created in the Cityâ€™s manufacturing sector through an agreement signed by the Buffalo City Metro and Chinaâ€™s Jinhua municipality. Four new electronics factories are expected to be established by the end of the year from the deal and at least 400 permanent jobs created when the factories open. No new buildings would be built as the factories, manufacture electronic devices including computers and cellphones would be housed at the East London Industrial Development Zone (ELIDZ). The signing ceremony was held on Thursday 24 August at the East London International Convention Centre in Quigney. The day started with a visit to the Mpongo Park Game Reserve and finished off with a signing ceremony. The visit comes after Executive Mayor Xola Pakati and his delegation visited China last month to negotiate lucrative deals with the country in an effort to bring jobs to the city. The visit intended to invest in the automotive, information technology, clothing and textile sectors. Speaking at the ceremony Pakati said, â€œIt gives us great joy and pleasure to host the delegation from the City of Jinhua in our Metro. We are confident that the visit and signing of our partnership agreement will strengthen our cooperation and enhance our mutually-beneficial relations as cities.â€ â€œLet the signing of this agreement be the beginning of a good chapter for both our cities,â€ he said. Adding to that Speaker of Council Alfred Mtsi said, â€œBCM and Jinhua have a 16-year relationship which seeks to improve the livelihood of BCM residents and reposition the City as a desirable destination for investors.â€ Response by Consulate of Peopleâ€™s Republic of China, Consul General Kang Yong said, â€œWe are very excited and grateful to the Metro about this deal, today we are turning a new page and injecting a new life between the Metro and Jinhua, the agreement will benefit the people from both cities.â€