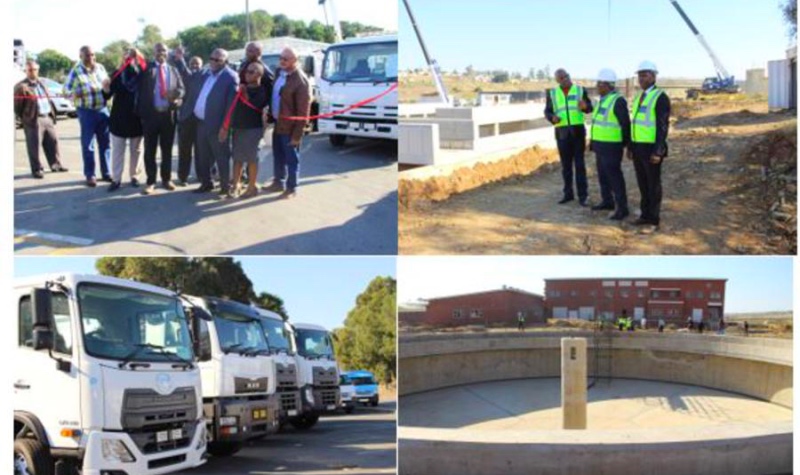 
On Wednesday 13 June, the Executive Mayor Xola Pakati unveiled a R54 million new fleet at the King Williamâ€™s Town War Memorial Hall. The fleet includes 20 new compactor trucks, eight tipper trucks, water tankers, and three TLBâ€™s. The municipality has been faced with a challenge of an ailing and inadequate fleet of refuse trucks to service the whole Metro. Previously the Metro had only eight refuse trucks to service the entire Metro, due to the intensive work and large area covered, the truckâ€™s condition had severely deteriorated. Giving the vote of thanks, Portfolio Head for Community Services Councillor Helen Neal-May said, â€œThe municipality will be able to deal with the issue of illegal dumping and also make sure refuse is collected on time across the Metro.â€ Representatives from Isuzu and Volkswagen which the Metro has contracts with, were there to ceremoniously hand over keys of the fleet to the mayor. BCMMâ€™s Infrastructure Services also conducted site visits to projects in the inland region of the Metro. Site visits were made to the new King Williams Town electricity sub-station, Cliff rural roads project, and the Phakamisa Waste Water Treatment Works (WWTW). A contractor has been appointed to resurface roads in the Cliff area of Phakamisa in Ward 25. The project worth R4 million has employed 14 labourers from the community and is expected to be completed in August. Pakati said, â€œWe understand that our Metro is not like the others, it is mostly rural therefore we should at all times be sensitive to rural development in particular service delivery to rural communities.â€ One of the Metroâ€™s Major projects is the Phakamisa WWTW, which in its completion service Bhisho, King Williamâ€™s Town (KWT) and Zwelitsha urban and peri-urban areas. This is a multi-year project worth R249 million and is expected to be operational by April 2019. Monitoring the project closely, Ward Councillor Mthetheleli Kolela said, â€œThe project is essential to the unlocking of development in the KWT, Bhisho business precinct and surrounding areas.â€ â€œOur infrastructure in the inland region is ailing and needs to be upgraded in order to have the capacity to service the new and developing communities.â€ In closing Pakati said that upgrading of infrastructure and the procurement of the new fleet will provide the municipality with the capacity to deliver services to the people with minimum outside intervention.