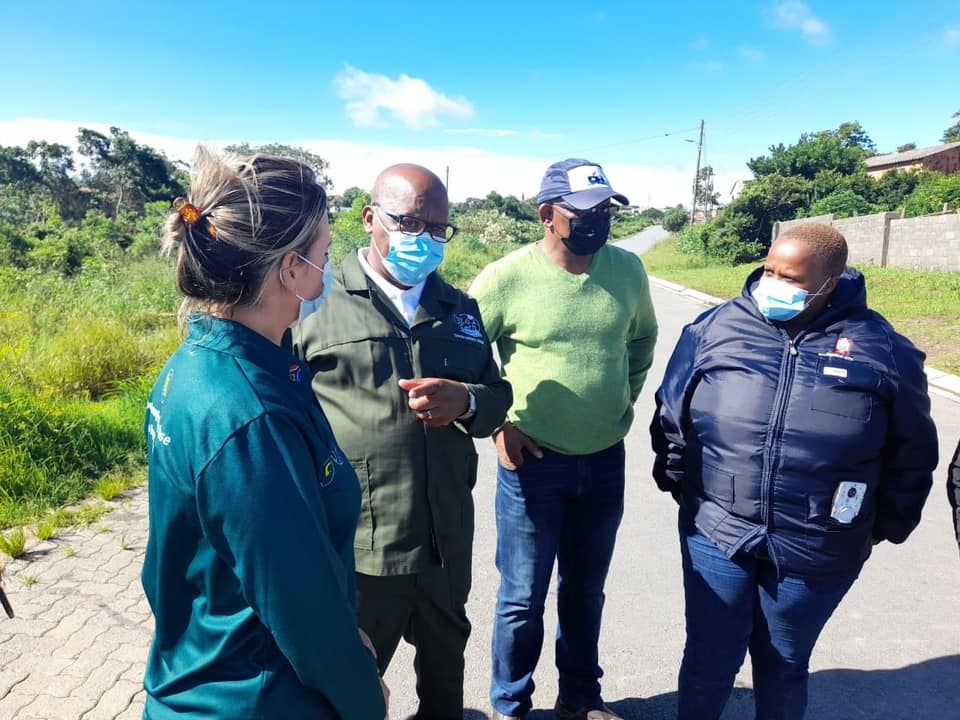 BUFFALO CITY METRO ESTABLISHES DISASTER OPERATIONS CENTER, WELCOMES INTERVENTIONS FROM NATIONAL, PROVINCAL GOVERNMENT & NGOs
The Buffalo City Metro has established a Disaster Operations Center (DOP) to coordinate and deal with the aftermaths of the flash floods that claimed lives and dispossessed hundreds in the City on Saturday, 08 January 2022.

The Disaster Management Operations Centre seats regularly and is dealing with both strategic and operational consequences of the severe floods. The Operations Centre, led by the City Manager, is also coordinating efforts by other government departments, entities, NGOs in order to integrate a comprehensive intervention.
The next DOP meeting will be held virtually this afternoon.
FATALITIES:
The latest status report as at 11 January 2022, regrettably reveals that seven fatalities are accounted for in the Metro. These are as follows:
• In ward 17, an 18 year-old female drowned at Zone 3 Gomora Skwatta Camp, Mdantsane
• Four people drowned at Horseshoe Valley Nahoon River of which one is a member of the SAPS search and rescue team. The fourth person was recovered by the search teams yesterday.
• Two children drowned in Buffalo River. An identification process is still underway.
The Disaster Operations Centre has been made aware that we have in our mortuaries, children twins that drowned in Mooiplaas village, outside the jurisdiction of the Metro.
The Municipality would like to send its sincere condolences to the families who have lost their loved ones in this tragedy.
We are visiting the bereaved families to ascertain their needs for assistance with funeral arrangements.
Two people were taken to Cecilia Makhiwane hospital with one treated for near drowning and another treated for traumatic stress and they have since been discharged.

Assessments are being conducted by Disaster Management, Human Settlements, Fire Brigade and the Provincial Disaster Centre.
Our human settlements officials are finalizing assessments of damaged structures in order to qualify needy residents for temporary structures.
Our Roads Department is actively cleaning debris on all blocked roads and unblocking blocked storm water drains. The major pipe which had a blockage in Ford Street, Duncan Village has been cleared.
The most affected roads are the Qumza Highway in Mdantsane, Woolwash Road near the Scenery Park bridge and the Douglas Smith Highway in Duncan Village.
Some bridges, in particular the Zone 15 road bridge, are damaged and requires assessment.
The South African Police service and our Fire Services have activated their search and rescue teams. One fire was reported as a result of the storm where a house was burnt after being hit by lightning.
We have activated Beach staff regarding debris on the beaches.
We are working with ward councillors to compile names and coordinate ward-based interventions for individuals (ID applications, Grants), households and affected families.
Families with structures that were totally destroyed and are unsafe to live have been taken to Municipal Halls around Buffalo City Metro as follows:
• NU 7 Community Hall: 34 people including children are temporary housed
• NU 1 Border Training Centre: 28 people including children are temporarily housed
• Maclean Town Community Hall: 25 people including children are temporarily housed
• Ward 6 Duncan Village: 4 families are staying with neighbors and relatives
• Ward 45 Nkqonqweni: 12 Families are staying with neighbours and relatives
WEATHER CONDITIONS:
The Municipality is in its rainy season and more rains are expected. We continue to urge residents not to build on river-banks and low-lying areas.
We are working with the SA Weather Service on predictions, alerts and warnings.
The Municipality has engaged with officials from the Nahoon Dam to update an early warning system.
We have obtained data from the SA Weather Service regarding the extent and impact of the flooding.

No water station in the East London area, shows any figure near a one in two-year event for a 24-hour period. The closest was Nahoon Dam ARS that received 85mm for 2 days (1:2 event is 88 mm for a 24-hour event and 92 mm for a 48-hour event).
Nahoon Dam ARS (16 km away from East London) does show a heavy shower of 39 mm in three hours, which just touches on a one in two-year event.
INTERVENTIONS:
The Municipality has activated its teams for social relief packages as part of mopping up operations whilst working with various government departments.
We would like to express sincere gratitude to all the stakeholders that have assisted the people of Buffalo City in their saddest time of need.
We commend efforts by the Gift of the Givers, Alimdaad and other NGO’s who have provided relief in the form of mattresses, blankets and food.
The Municipality also recognizes the efforts by national government and the Eastern Cape government in the form of assistance to the victims of the floods.
We would like to call upon the business community and individuals to assist. Some victims have lost everything including clothes, furniture and are in need of groceries.
WATER ND ELECTRICITY OUTAGES:
The main affected area has been Mdantsane. An Update on affected areas is as follows:
So far there has been nearly 200 electric faults that have been fixed. The City has added two Crane trucks and three additional Cherry Pickers for the electrical faults in and around Mdantsane.
Domestic faults have been reduced from 380 to 190 this morning.
We are left with only 10 out of 23 broken domestic poles that still need replacement and a team has been sent out to attend to this matter.
WATER RESTORED IN MDANTSANE, TSHOLOMNQA
Following the flash flood that caused damage to some of our infrastructure, water has been restored in many parts of Mdantsane. Water has also been restored in the villages around Tsholomnqa.
Our technicians are working to restore water in parts of Unit P and NU 12. We will continue supplying tanked water to those affected areas.
Despite having full water capacity in the reservoir, the levels across Mdantsane have been low, and as a result our teams are hunting for possible burst on the system.
We apologize for the inconvenienced caused.flooding.