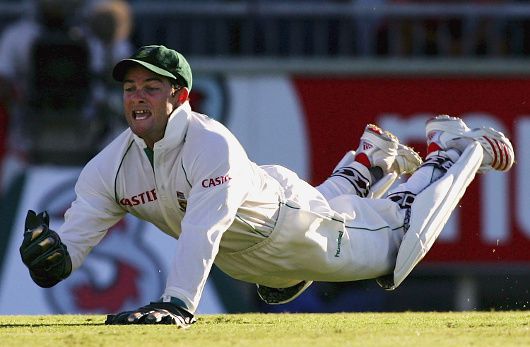 Mark Verdon Boucher was born 3 December 1976 in East London. He is a South African cricket coach and former cricketer, who played all three formats of the game. Boucher holds the record for the most Test dismissals by a wicket-keeper, with 532 catches and

Boucher started his 2007 Cricket World Cup campaign in good form with a 21-ball half century, the then fastest in World Cup history (before being beaten by Brendon McCullum's 20-ball effort six days later) â€“ scoring 75 not out against the Netherlands as South Africa scored 353 for 4 wickets in a rain-shortened World Cup match.
Mark Boucher packed all the archetypical attributes of the South African cricketer into his short, stocky frame. He was relentlessly competitive, invariably aggressive, and as hard and uncompromising as the new ball. After an international career that lasted almost 15 years, the end was desperately unfortunate, as Boucher was forced to announce his retirement after being hit in the eye by a bail in a warm-up game on the tour to England in 2012, which would have been his last series anyway. Boucher finished with 998 international dismissals as a wicketkeeper, including 555 in 147 Tests.
He became the first wicketkeeper in the history of test cricket to reach the milestone of 400 dismissals when he caught Danish Kaneria off the bowling of Makhaya Ntini on 10 October 2007 in the second test of the Bank Alfalah Test Series against Pakistan a Gaddafi Stadium, Lahore.