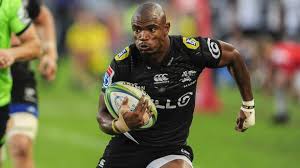 He was born on the 26 July 1990 in Mdantsane near East London. He is a South African rugby union player for the Sharks in Super Rugby and the Currie Cup and the Sharks XV in the Rugby Challenge. He usually plays as a winger .

He was one of several amateur club players brought into the Border Bulldogs provincial set-up at the start of 2014 after the professional side was declared bankrupt.
Mapimpi was included in their squad for the 2014 Vodacom Cup competition and made his debut in their opening match against a Sharks XV. Border lost the match 24â€“46 but Mapimpi marked his first class debut with a try shortly after half-time.
He also started in their 6â€“60 loss to Eastern Cape rivals Eastern Province Kings and their next match against Kenyan invitational side Simba XV, scoring the Border Bulldogs' second try in that match to help them to an 18â€“17 win, their only victory of the competition.
Makazole also started the remaining four matches in the competition, scoring his third try of the campaign in their match against the SWD Eagles as the Border Bulldogs finished bottom of the log.
He was retained for their 2014 Currie Cup qualification campaign and he made his debut in the Currie Cup competition by starting their opening-day 5â€“52 defeat to Griquas. He missed their next match against the Boland Cavaliers, before starting their other four matches in the competition.
However, the Border Bulldogs lost all six of their matches to finish bottom of the log and qualified to the 2014 Currie Cup First Division. Mapimpi once again started all five of their matches, including their first match against the Falcons, which turned out to be the Border Bulldogs' only victory of the season as they ran out 19â€“14 winners. He scored tries in consecutive matches against the SWD Eagles and a Leopards side that eventually finished top of the log but could not prevent the Bulldogs from finished bottom of the log with a single win all season.
Mapimpi returned in the 2015 Vodacom Cup but ended up on the losing side in their first six matches in the seven-match competition.
He was the star performer in their final match of the season against the Boland Cavaliers in Alice, he scored a hat-trick of tries and with regular kicker Masixole Banda unavailable for this match, also took over the kicking duties and slotted three conversions and a penalty.
Makazole finished the match with a personal haul of 24 points in the Border Bulldogs' 29â€“5 victories to help them overtake the Boland Cavaliers on the Southern Section log.
He also scored a try three minutes from the end of the Border Bulldogs' first match of the 2015 Currie Cup qualification tournament with his side causing an upset by beating Griquas â€“ the team that won the qualification tournament in 2014 to earn a spot in the 2014 Currie Cup Premier Division â€“ 20â€“13 in a match played in East London.