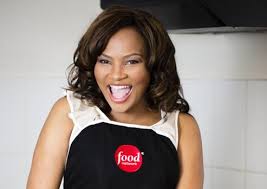 She professionally known as Siba Mtongana is a South African celebrity chef known as the host of the Cooking Channel show Siba's Table. She is currently a judge on Chopped South Africa, alongside Jenny Morris and David van Staden.

Siba grew up in the township of Mdantsane N.U 17 near East London but for almost 14 years she has made her home in Cape Town. She is the daughter of Noliza, a retired teacher and Mncedisi Mnwana, a retired supervisor of a leather goods manufacturer. She is the youngest in a family of six children. Siba is married to Brian Mtongana.
After finishing her degree, she took on the role of Food Editor for the iconic weekly Drum magazine which led to hosting her very first cooking show, â€œCooking with Sibaâ€. The show ended up winning a South African Film and Television Award and ended up with a show on the Food Network called â€œSibaâ€™s Tableâ€.
â€œIâ€™m a celebrity chef, author and entrepreneur â€“ the Founder of a company called â€œThe Siba Co.â€ which specializes in â€œeverything foodâ€. Iâ€™ve published a cookbook called â€œMy Tableâ€ which has become a South African bestseller. I also host a cooking show called â€Sibaâ€™s Tableâ€ in over 128 countries. In the US alone, it airs to over 60 million homes through â€œThe Cooking Channel,â€ said Mtongana.
â€œI absolutely consider my industry to be the â€œfieldâ€ I am found in and a huge privilege to have such a massive reach through which Iâ€™m able to share my passion, skills and expertise. I want to show people that itâ€™s possible to be a successful, influential person and a devoted Christian. My hope is that my life would be evidence that there is God in heaven who loves and cares for us deeply,â€ She said.
Mtongana is inspired by our former late president Nelson Mandela â€“ an iconic figure in our nation, who masterfully liberated and united us as a country at the same time.